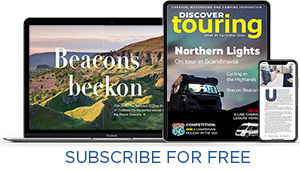 Caroline Mills takes you on a budget-friendly tour of Edinburgh

Scotland’s capital city, Edinburgh, is one of the most beautiful cities in Britain and, because of its landscapes and architecture, is designated as a UNESCO World Heritage Site.

There are many award-winning paid-entrance attractions to visit, such as the Royal Yacht Britannia, Palace of Holyroodhouse, Edinburgh Castle, Dynamic Earth and the Scotch Whisky Experience. But, if you’re looking for a budget-friendly camping break, these are my suggestions for ways in which to explore Edinburgh for less than £5.

Explore with a walking tour

Edinburgh is brimming with architectural interest in both the Old Town – narrow streets and tall townhouses dating back to the medieval period – and New Town, the symmetrically planned Georgian area of the city. I’d recommend beginning a self-guided tour outside the National Museum of Scotland, say ‘hello’ to Greyfriar’s Bobby, Edinburgh’s most famous dog at the southern end of George IV Bridge, then head down Candlemaker Row to Grassmarket where you’ll find plenty of continental bistros and, reputedly, both Scotland’s smallest pub and, nearby, Edinburgh’s oldest pub.

Skirt the base of Edinburgh Castle to Princes Street, then discover the notable differences in architectural style of the New Town around Charlotte Square, George Street and the circular Moray Place for some of the grandest Georgian houses.

Return back to the Old Town via The Mound to reach the High Street, otherwise known as Edinburgh’s famous Royal Mile, which runs between Edinburgh Castle and the Palace of Holyroodhouse.

You can discover the city’s rich history through the ‘Edinburgh’s 101 Objects’ programme – download an itinerary from the official tourist board website and look out for the specially created signs next to each object as you walk the city.

Get on two wheels

Alternatively, you could hire a bike – there’s a fleet of 500 bikes at docking stations across the city. It costs just £3 for a day subscription or £1 for an hour’s use. Register at: edinburghcyclehire.com.

Edinburgh is full of museums that you can visit free of charge. Start at the Museum of Edinburgh, where you can find out about the development of the city and its place as a centre of superior quality manufacture such as silverware and crystal glass. Or why not try The Writers’ Museum, which celebrates the lives of three giants of Scottish literature – Robert Burns, Sir Walter Scott and Robert Louis Stevenson?

You can discover a nation’s treasures at the National Museum of Scotland, which has a diverse collection through history, nature, culture and science.

Highlights include the world famous cloned Dolly the Sheep, jewellery belonging to Mary Queen of Scots, and the mysterious Lewis Chessmen.

The National Library of Scotland holds the largest collection of rare books in Scotland plus music scores, plays, early newspapers, maps, posters and photography. There’s always a free exhibition taking place and regular free events such as workshops and talks. A Visitors’ Centre provides snapshot displays of the Library’s 26 million items in its collection.

Anyone can visit the Scottish Parliament building, located at the end of Canongate, directly opposite the Palace of Holyroodhouse. The futuristic building’s exterior is a sight to see but inside, you can take a self-guided tour or opt for a free themed public guided tour on the building’s architecture, its art collection or to photograph this iconic building.

Have tea with the Queen

Well, not exactly but the Café at the Palace (the Palace of Holyroodhouse, that is, where the Royal Family stay during official engagements in Scotland) received an Award of Excellence in the Afternoon Tea Awards 2018. You can visit the café without paying the entrance fee to visit the Palace and enjoy Edinburgh tea and scones or cake, such as Scottish Cranachan Cake, a sponge with butter icing and raspberries.

The birthplace of Harry

Alternatively, take morning coffee at The Elephant House on George IV Bridge. It’s not the best café in town but Harry Potter fans will feel a connection for this is where author J.K. Rowling began her writing career and wrote the first of her novels in the Harry Potter series.

Charlotte Square is one of the most prestigious addresses in Georgian Edinburgh. It was the grand finale of 18th century town planner James Craig’s New Town plan and Robert Adam, the leading neoclassical architect in Britain was employed to design many of the buildings. The Square became the template for statement architecture for years to come.

One house to visit in Charlotte Square is The Georgian House, a restored Robert Adam house. Here you can step back in time to the elegance and refinement of late 18th century Edinburgh, discover the lives of those who have lived and worked here and view exquisite paintings and china. There is an entrance charge but members of The National Trust or The National Trust for Scotland can visit free.

Listen to some music

Invariably, you’ll come across at least one kilted bagpipe player as you wander around Edinburgh. Prominent places for them to play are the Royal Mile and around Princes Street and Princes Street Gardens, where you can take a picnic and listen to impromptu busking and planned open-air concerts.

Edinburgh is blessed with some of the most magnificent countryside right in the heart of the city. Holyrood Park provides acres of wild space to go walking or for youngsters to let off steam with an energetic run. Arthur’s Seat, an ancient volcano, and Salisbury Crags are two of Edinburgh’s most notable landmarks and, from the top, offer spectacular views of the city and for miles beyond.

Opposite Salisbury Crags is another of Edinburgh’s great viewpoints, Calton Hill.

Formed by violent volcanic activity 340 million years ago, the hill was bought and established as one of Britain’s first public parks in 1775. Hume Walk, which runs around the hill, was one of the first public walking routes entirely for recreational use to be created in Britain.

In addition to wonderful views over the city and the Firth of Forth, the hill is home to several of the city’s best-loved monuments, all free to view, including the National Monument, built in the Greek neo-classical style and based on the Parthenon in Athens and the Nelson Monument (pay to climb). The City Observatory, inspired by a Greek temple, has been redeveloped as an exhibition space for contemporary art.

The Lookout by Gardener’s Cottage panoramic restaurant on Calton Hill offers seasonal cooking using local produce and some of the best views of Edinburgh through the floor to ceiling glass windows. Having seen Edinburgh for free, why not treat yourself to a generous brunch for £18 per person? Otherwise, you can snack on a bowl of olives or plate of charcuterie for £5.

Queen’s Drive is a circular, one-way touring route around Holyrood Park. The three-mile road is quiet and a bike ride offers a great way in which to see wonderful views of Leith, the Firth of Forth, Arthur’s Seat, Salisbury Crags and the city skyline. You could stop by at the scenic Dunsapie Loch for a picnic.

The best for colour

One of the most colourful sights (and best attractions) in Edinburgh is a visit to the Royal Botanic Garden. The 70-acre landscape is one of the world’s best botanic gardens – and you can visit for free. There is a charge to enter the ten notable glasshouses but you’ll otherwise have plenty to see and enjoy at any time of year in this truly beautiful setting.

Discover Where to Stay

This very pleasant and immaculately kept campsite is located within the rural setting of a 200-acre country estate, which has been owned by the same family for more than 400 years. Yet the campsite is just three miles from Edinburgh city centre, conveniently accessed by frequent buses, including a Night Bus, from the estate entrance, five minutes’ walk from the campsite. Pitches allow for tents, touring caravans and motorhomes and there are also glamping pods, chic shepherd’s huts and modern static caravans (separated from the touring pitches) available for hire. Views of Arthur’s Seat and the Pentland Hills can be seen from the site, which also has numerous footpaths to enjoy a country walk through the estate where you can meet Ed the Red and Dave the Rave, the campsite’s two resident Highland cattle.

The Stable Bar and Restaurant serves excellent food on site, while a small shop at reception sells essentials. There is also an outstanding farm shop at the estate entrance selling high quality produce from the local area.

The campsite is open all year.

Cool Caravans for Touring in Style

How To Tow A Caravan

Everything you’ll need to know about how to tow a caravan.
Read more

Top 10 motorhomes of all shapes and sizes for the discerning adventurer.
Read more
Advertisement

Touring is the magazine for motorhome, caravan and camping inspiration. Subscribe today and never miss an issue!

We are using cookies to give you the best experience on our website. You can find out more about which cookies we are using or switch them off in settings.

This website uses cookies so that we can provide you with the best user experience possible. Cookie information is stored in your browser and performs functions such as recognising you when you return to our website and helping our team to understand which sections of the website you find most interesting and useful as well as giving us insight from Google as to the demographic of our visitors.

Strictly Necessary Cookie should be enabled at all times so that we can save your preferences for cookie settings.

If you disable this cookie, we will not be able to save your preferences. This means that every time you visit this website you will need to enable or disable cookies again.

This website uses Google Analytics to collect anonymous information such as the number of visitors to the site, and the most popular pages.

Please enable Strictly Necessary Cookies first so that we can save your preferences!